A Brief History of the Yale Typeface 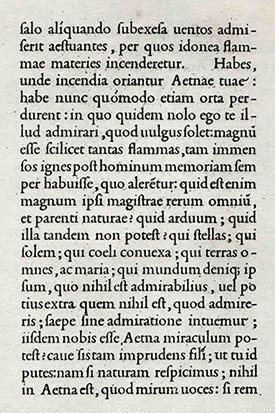 “Yale” is inspired by the late-fifteenth-century Venetian typeface that first appeared in Pietro Bembo’s De Aetna, published by Aldus Manutius in 1495. A copy of this book may be found in the collection of the Beinecke Rare Book & Manuscript Library at Yale.

Aldus Manutius was among the most prolific and successful publishers of printed books in his day, and the De Aetna face was used to set a number of his scholarly publications which were widely distributed and admired in Renaissance Europe. Arguably, it has had the greatest influence upon subsequent type design of any Renaissance typeface.

In 1929, Stanley Morison of the Monotype Corporation in England led a project to revive Aldus’s De Aetna face. The resulting typeface, Bembo, proved to be one of the most widely used and highly regarded book faces of the twentieth century. It appeared regularly in Yale publications of all kinds. Unfortunately, digital versions of Bembo lack the vigor and weight of either the De Aetna face or the original Monotype version of Bembo.

Matthew Carter’s “Yale” recovers the strength of the Aldine original and updates it by sensitively simplifying the essential letterforms and their details. Aspects of the drawing and “color” of the well-known typeface Galliard, an earlier Carter design, are also evident in the Yale face.

First developed for use in Yale’s current signage initiative, the Yale typeface was extended to include bold roman and bold italic fonts suitable for print and Web work; and as of August 2014 it is provided in the OpenType file format which is cross-compatible with Macintosh, Windows, and Unix operating systems.

The Yale typeface is available to Yale employees and students for use in Yale publications, communications, and academic work.
Download the typeface